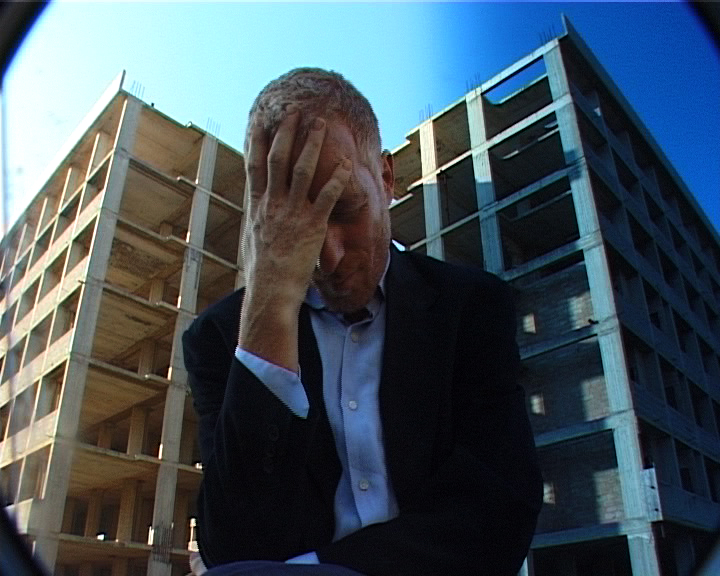 Horatio’s dream wants to be the representation of William Shakespeare’s tragedy dreamt by Horatio, Hamlet’s friend. A dream about the superimposition of the personalities that is typical of the dream and the human brain.

The movie is performed in a huge unfinished building, obsessively repetitive, with only the floors and pillars and many cracks on the void.  A concrete jungle in a strident sonorous context between the croaking of frogs and the echoes of the traffic jam of the nearby highway. In this framework the characters, as actual replicants of the Shakespearean plot, move as ghosts, passing through their own darkness inside, looking for the Hamletic essence that is telling of the human being’s unanswered question: “To Be or Not To Be…”

Our aim is to find a dwelling to the plot according to the space where we build the dramatic action, and to recreate Hamlet by telling about the places where we live today. Elsinore here represents suburbia, a place of neglection, of coldness that lives in us even before becoming a building that will then turn into a home, a hearth. It represents that place of the mind where abuse, speculation and loss are allowed.

“History can be servitude. History can be freedom, now they disappear. Faces and places, with that part of us that would love as it could. To renew, transfigure itself in another plot.”

HORATIO’S DREAM is a film completed in September 2015 and it has never been shown before.

HAMLET – THE QUEEN   Maria A. Listur

FRAMES I "I would only paint half a picture if I